Drew Dunn started doing comedy at the age of 21 and hasn’t looked back since. This NH-based comic has quickly established himself as one of the most dynamic comedians in the country with his quick wit and unique point of view. It has been featured at comedy festivals across the country, including the Johnny Carson Great American Comedy Festival, and was named “Best of the Fest” at the 2017 Burbank Comedy Festival.

Audiences around the world know Tony and Emmy award-winning actor John Lithgow for his delightful performances on stage and screen. In a lively discussion, Lithgow reflects on the iconic roles that make up his decades-long career, from cultural touchstones like The World According to Garp and 3rd Rock from the Sun to his more recent SAG-winning role as Winston Churchill in the smash-hit Netflix original series The Crown. Lithgow puts social and political advocacy at the forefront of his public speaking, emphasizing the importance of the arts and education, as well as his recent forays into the world of political satire with the publication of the New York Times bestseller Dumpty. trilogy of books. Always charming, John Lithgow dazzles audiences with his signature wit and heartfelt conversations. 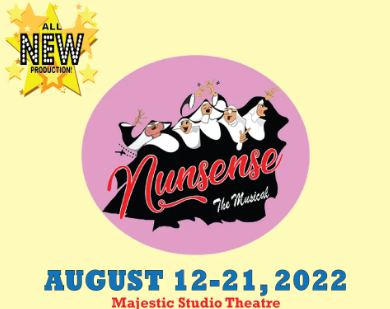 Nunsense begins when the Little Sisters of Hoboken discover that their cook, Sister Julia, child of God, has accidentally poisoned 52 of the sisters and they are in desperate need of burial funds. The sisters decide that the best way to raise money is to put on a variety show, so they take over the school auditorium, which is currently being set up for the production of “Grease” in the eighth grade. With star tricks, tap dancing and ballet, an audience quiz and comedic surprises, this show has become an international phenomenon. Updated by the author with new jokes, additional lyrics, two new arrangements and a brand new song.

Yes, it is indeed a program on Johann Gutenberg, inventor of the printing press. But it’s also about Bud and Doug, two aspiring playwrights who wrote a show about Gutenberg – a show they’re convinced is the best musical ever written, ever! Now they’re doing a showcase for really big Broadway producers. But can two guys with no sets, no costumes and a handful of props pull off an entire Broadway show? They can definitely have fun trying! Produced by Community Players of Concord, NH. www.hatboxnh.com

Unlike other Beatle Tribute bands that attempt to showcase the entire Beatles catalog in a single two-hour show, STUDIO TWO focuses solely on the most exciting and fun time of the Beatles’ career: the club. and years of touring. Those were the years people saw them play. The years the Beatles shaped their sound and stage performance, and the years they took the world by storm and changed everything. http://www.studiotwotributeband.com

Christ’s College is one of the constituent colleges of the University of Cambridge and has had a chapel choir since its founding in 1505. Led by Professor David Rowland, Director of Music at Christ’s College, the choir sings a selection of English music and European. choral traditions from the 16th to the 20th century. The choir has a wide concert repertoire. On this tour, they sing a wide range of music from religious and secular traditions, ranging from Tallis to Britten. Tickets: $25.00 at the door.

The 12 piece band ARRIVAL FROM SWEDEN – The Worlds Biggest ABBA Tribute Show ARRIVAL From Sweden are one of the most popular and best selling ABBA show bands in the world and since debuting in 1995 the production has toured over 60 countries and has appeared on several TV shows – and radio shows around the world. www.tupelomusichall.com